MADE IN STEAMBOAT: ENTREPRENEURS FIND THEIR FOOTING – AND INSPIRATION – IN THE YAMPA VALLEY 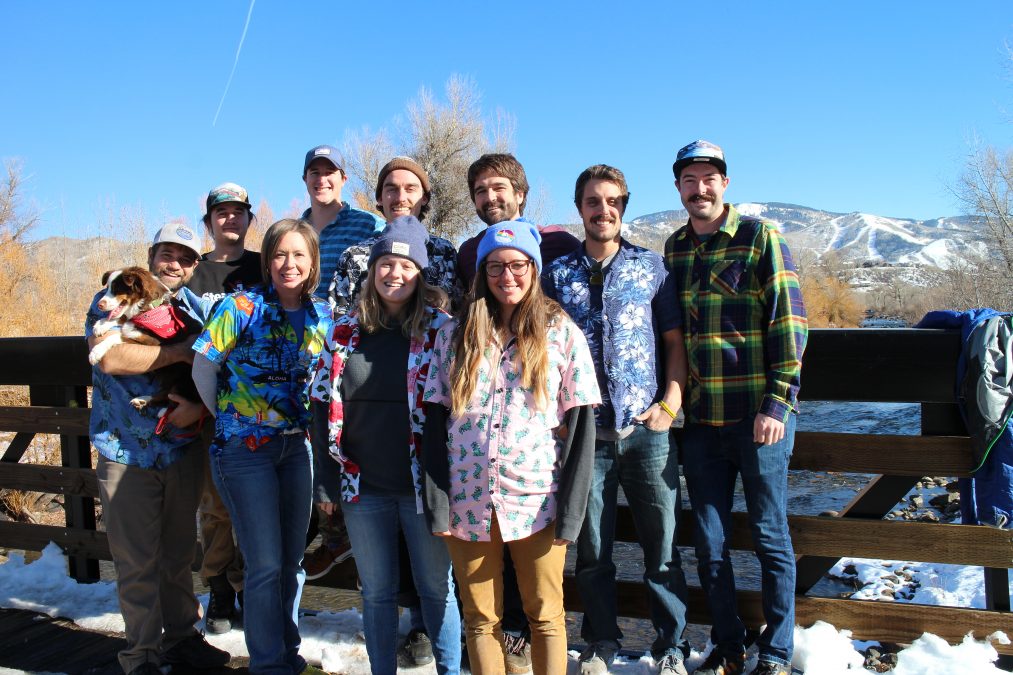 When it comes to businesses that began in Steamboat, people often think of Smartwool, a company that found its footing—literally—in 1994 when it began with socks made from Merino wool. The company grew exponentially over the next two decades and evolved from making socks to a full apparel line with everything from underwear and jackets to hiking skirts. It also became one of Routt County’s largest employers until it was acquired by VF Corporation, and its headquarters were moved to Denver last year. Others that come to mind might be Honey Stinger, Big Agnes, or Boa Technology, all of who have experienced great success in Steamboat, growing their brands to national recognition over the years.

Steamboat’s surroundings and active mountain lifestyle has inspired many young entrepreneurs, but community support is what ultimately led these young companies to success. “It’s been a wonderful place to launch a start-up,” says Andrew Becker, who revolutionized the ski pole market with his company, Grass Sticks. He was able to launch the brand in part with a grant he won from the Yampa Valley Entrepreneurship Center in 2015. “It would be hard without the support of the local community,” he says. Funded by Colorado Mountain College, the City of Steamboat, and Routt County, YVEC supports local start-ups with an office-based incubator, one-on-one counseling, seminars, and other programs. Becker is one of several successful local start-ups that made their dreams come true in Steamboat, with likely many more to follow.

Hala Gear
When it comes to finding inspiration in your surroundings, having a river run through it—literally—was a dream come true for Peter Hall, founder of Hala Gear Stand Up Paddle Boards. As a kayaker and a surfer, Hall’s desire to surf the Yampa River was pure instinct, but he had no equipment to do it.

“No one was making equipment for whitewater paddle boarding, so I picked up a cheap inflatable paddle board that was basically a glorified pool toy and was taking that down the river. I thought this would be fun if only this board was built to handle these conditions. So, I started trying to design and make equipment I would want to use.” Hall started with a pen and paper, sketching his designs and figuring it out as he went. 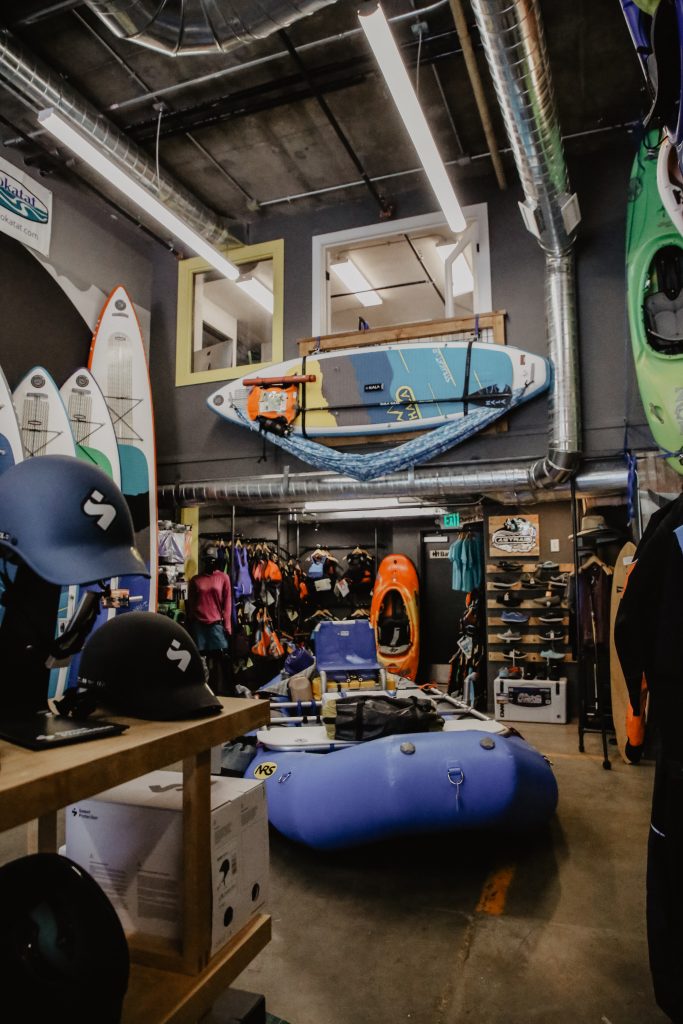 It turned out to be a very lengthy (and costly) process, but one that would yield many breakthroughs in technology and set a standard for the burgeoning SUP industry. His patented innovations include the double-bladed paddle (similar to what kayakers use), a retractable fin system called the Stomp Box, and double-stack technology that uses multiple layers to shape the edge of the board. “These are innovations I was able to bring to life by wanting to push the medium further,” Hall says. 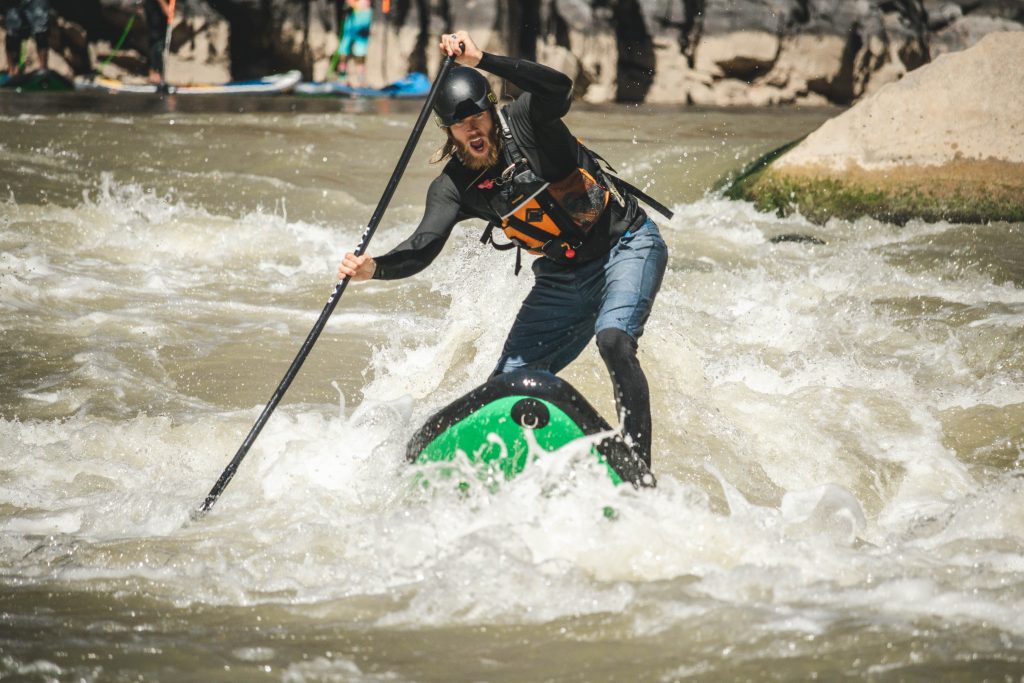 Today, Hala Gear has a complete line of boards and paddles in every category from $899-$1499. Their boards span every category from family float boards to whitewater paddle surfboards and boards made for tackling big waves in the ocean. GearSpace is their downtown Steamboat storefront location on Yampa Street where you can demo the gear and check out their products in person. “The surroundings here are amazing. You can figure out to make better products because you’re always looking for new ways to explore, and ultimately that’s why Steamboat is an awesome place to develop product.” //halagear.com

Harvest Skis
Eric Baker’s initial obsession was shaping surfboards, but he quickly realized how impractical that might be for someone who lived in Steamboat. Instead, he turned his attention to making skis. “I knew people who were building skis in their garage and got really inspired,” Baker says. 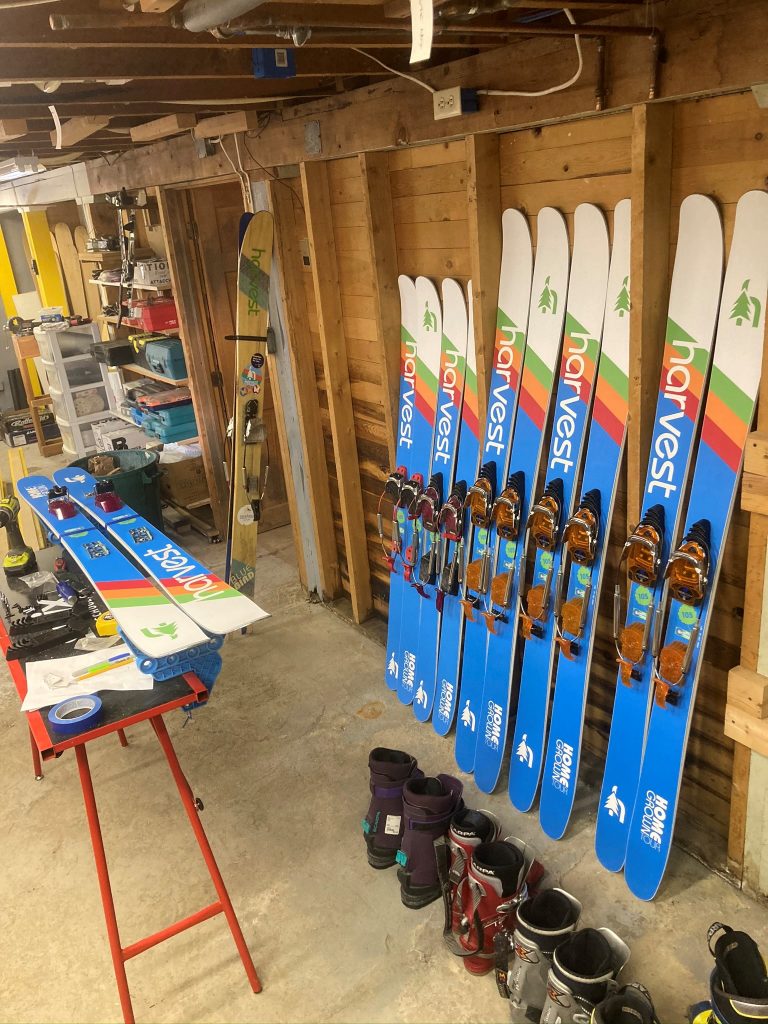 What ultimately launched Baker’s career as a ski manufacturer was a ski and snowboard product design class he took at Colorado Mountain College. Not only did Baker win the branding and design competition, but he was also the first student in the program’s history to do the manufacturing himself. He made 30 pairs of skis—one for every student in the class—and his business was off and running. “That class was really what helped push me. It was really inspiring,” he says. 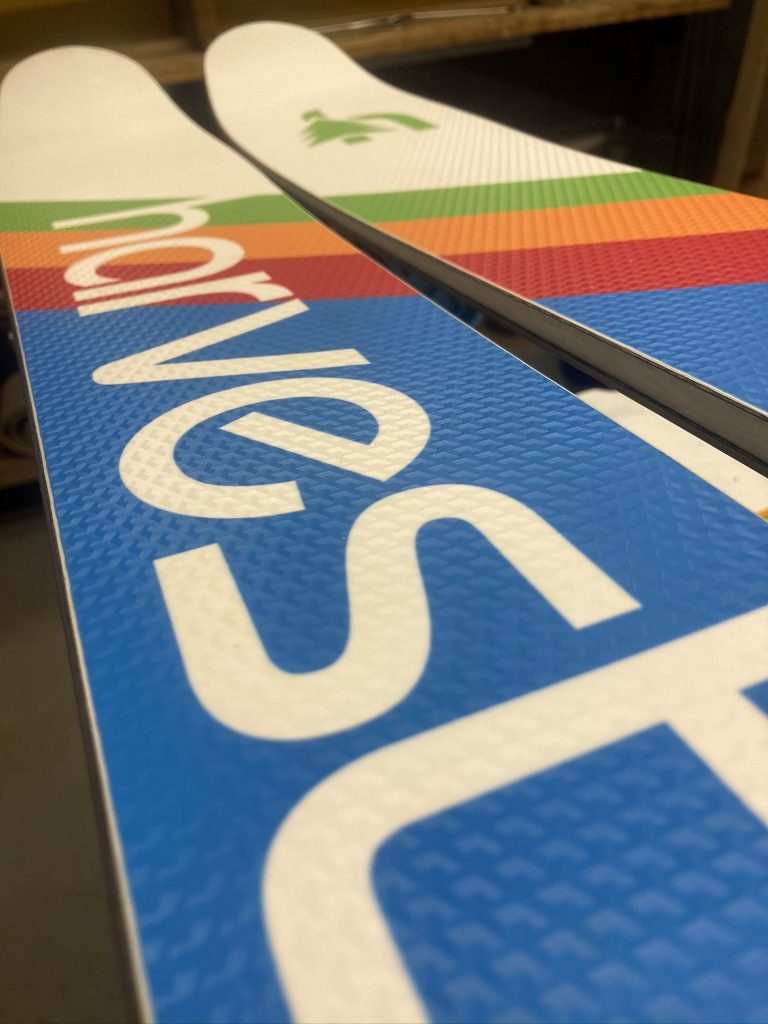 After founding Harvest Skis and manufacturing out of his garage, he eventually partnered with Never Summer Industries in Denver to produce all his skis. Since then, his business has grown tenfold from that original run. Today Harvest offers four models (freestyle/park, all mountain, powder, and touring) and sold over 375 skis this season alone. Still, Baker says, he’s a small boutique brand who does everything as close to home as he can. “It’s still a one-man show,” he says. “If you reach out to customer service, that’s going to be me.” //harvestskis.com

Grass Sticks
“When you talk to other skiers, they get so amped up about skis and boots and jackets, but no one ever talks about their ski poles,” says Andrew Beckler, founder of Grass Sticks. “I wanted to make a ski pole people were excited about and back it up with performance.” His goal was to make something light and strong but also eye-catching. 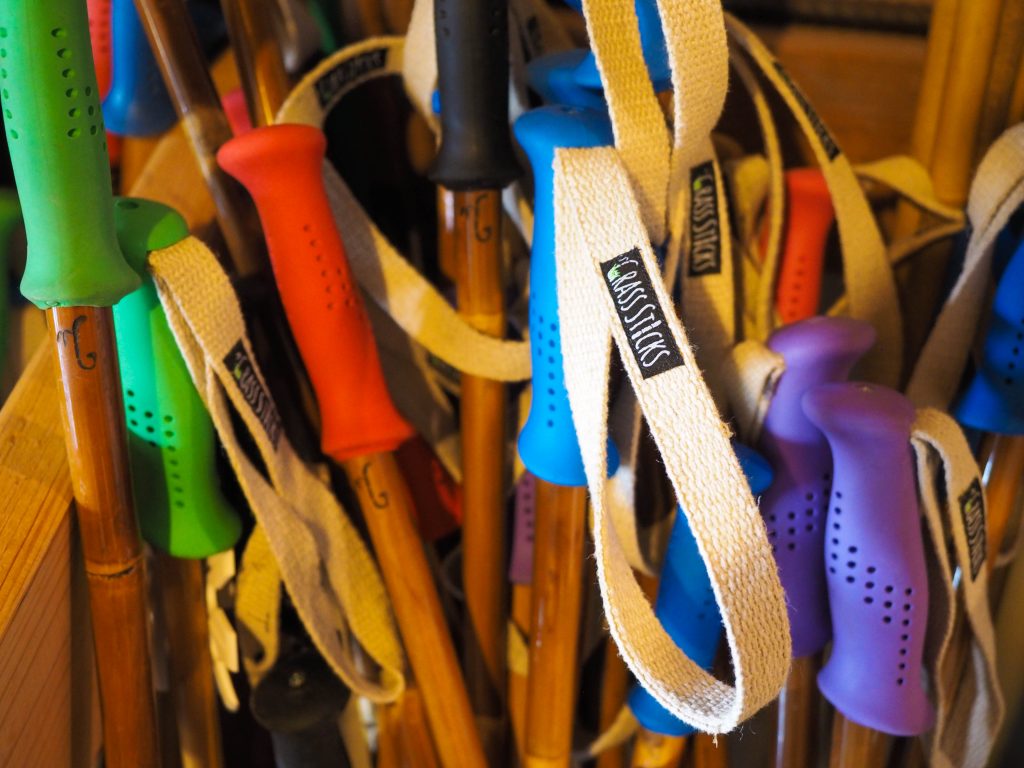 In 2015, Beckler left his post as a ski instructor to focus on just that. He experimented with various pole materials, basket sizes, and grips and eventually settled on bamboo. “It’s a renewable resource that’s also light, strong, and beautiful,” he says. That year, Beckler also benefitted from YVEC when he won a small business plan competition and was awarded a $10,000 grant that helped him get up and running. “It’s incredible to have that program here, and to have that support from the city meant a lot to the business early on.” 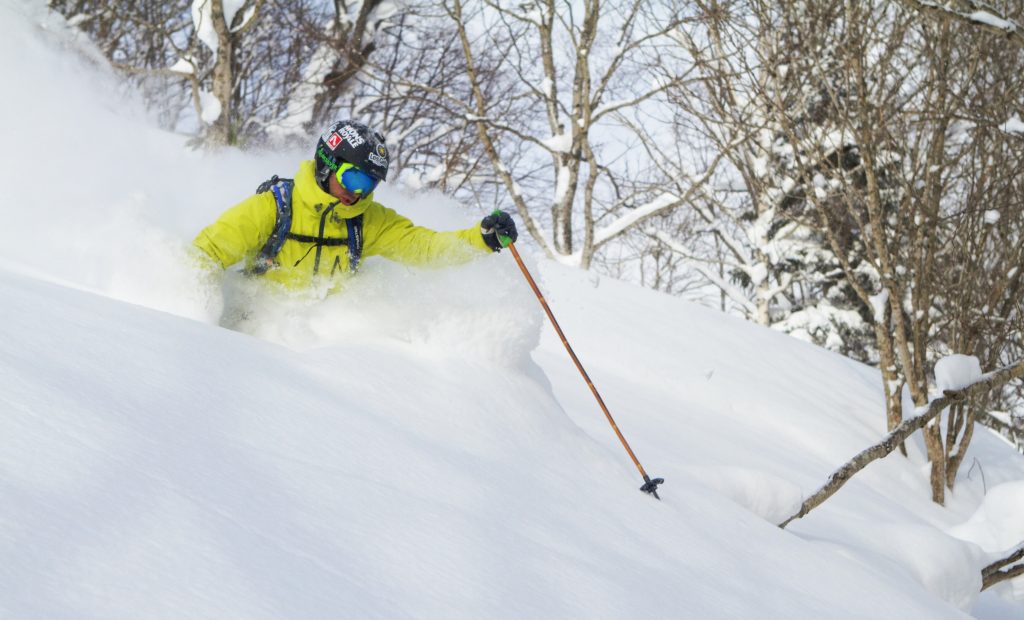 That first winter, Beckler made ski poles out of his kitchen, and four years later, Outside magazine named Grass Sticks the Best Ski Poles of 2019. Today he has a full-fledged commercial space and managed a production run of 2,000 units this year alone, including a large order from REI. In addition to high performance, Grass Sticks are beautiful exposed bamboo and can be customized with a wide array of brightly colored grips and baskets or can be or dolled up with graphic straps (aloha flowers or tie-dye, anyone?) and engraving. Now that’s a ski pole worth talking about. //grasssticks.com

Moots
Founded in 1981, Moots just celebrated its 40th anniversary and isn’t exactly young anymore, but the bike manufacturer’s long-term success shows that companies born in Steamboat can stay and thrive in Steamboat. “We started right here in Steamboat with our original founder who is passionate about building the bikes he wanted to ride, and the company has continued with that same mantra,” says Moots owner Brent Whittington. “Our DNA is here in Steamboat where road, mountain, and gravel biking are readily available.” 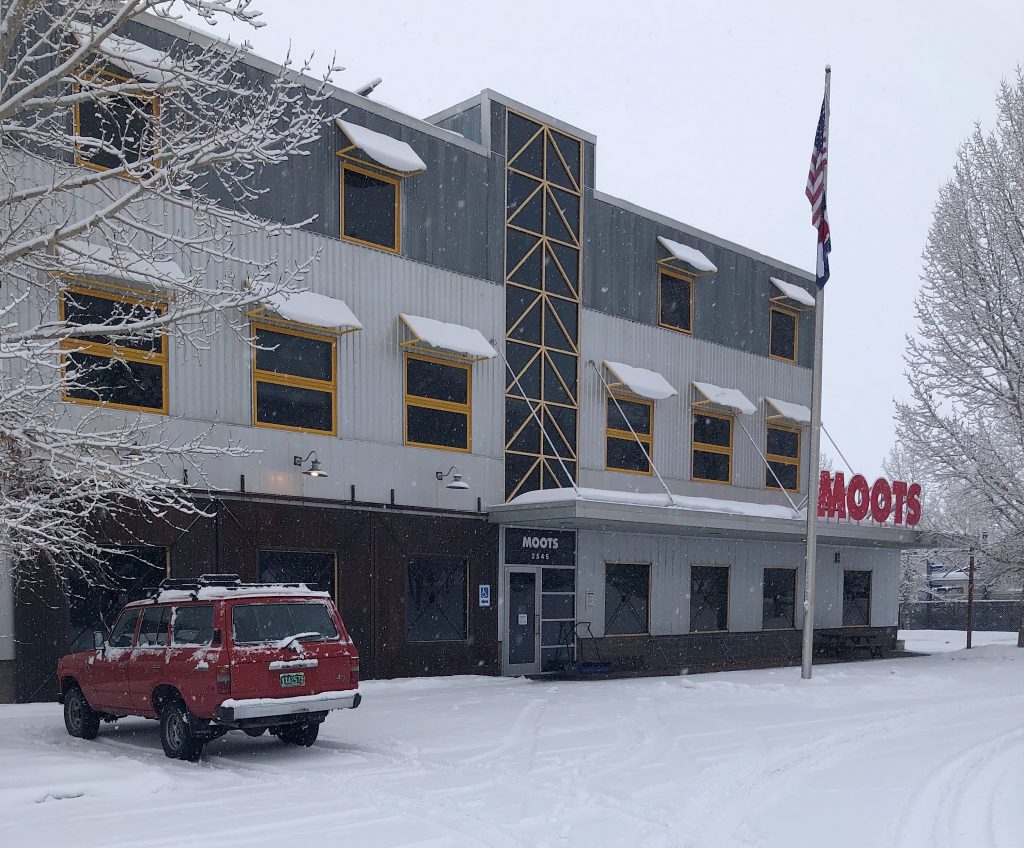 Bikes with titanium frames have always been Moots’ signature. “It’s the best material to make the best bikes,” Whittington says. Founded in 1981 by Kent Eriksen, the company has had three owners in its 40-year history and remained locally owned. The high-end titanium bikes are hand-crafted by a team of talented and passionate cyclists who have put in the miles both on the bike and in the company. “The real credit goes to the team and to their passion. We don’t make entry-level bikes. We only make the best. To have the talent here in this community speaks for itself.” 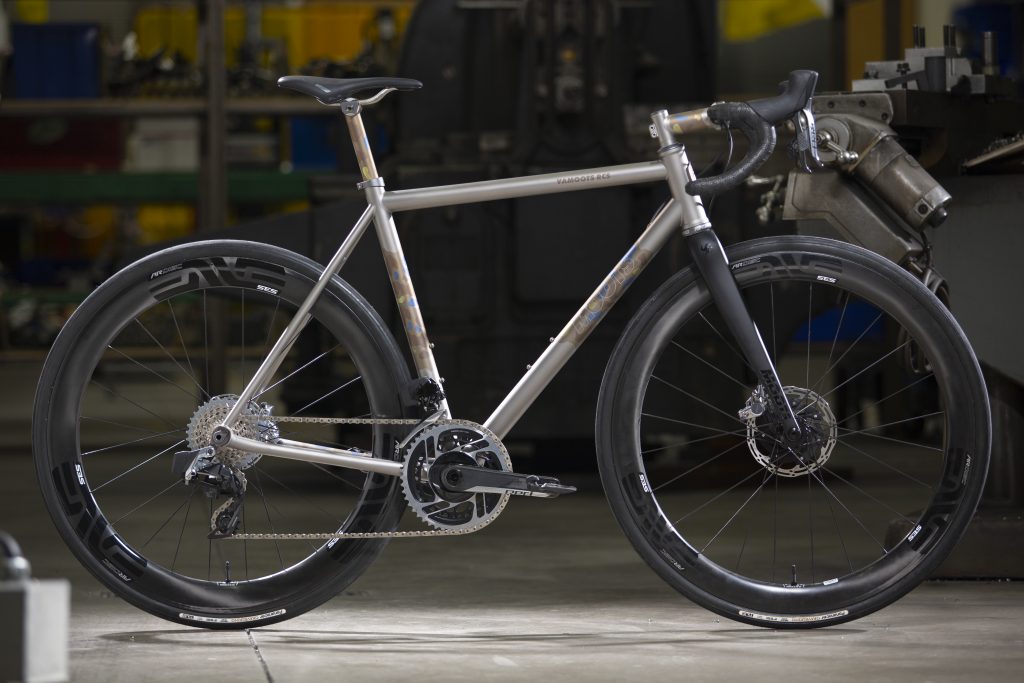 What began with a custom steel road frame has evolved into a full-fledged manufacturer of road, mountain, cross, gravel, and specialty bikes. “We really love cycling. It’s not just about craftsmanship and understanding what it means to build a bike but understanding how it should ride. That passion shows through in our product,” Whittington says. “We do not compromise. We build the best possible bike. If you lead with quality and your team believes in what they’re doing, you’re always going to have a product that sells itself.” //moots.com