PUT A LITTLE PEP IN YOUR PEDAL: EVERYTHING YOU WANT TO KNOW ABOUT E-BIKES 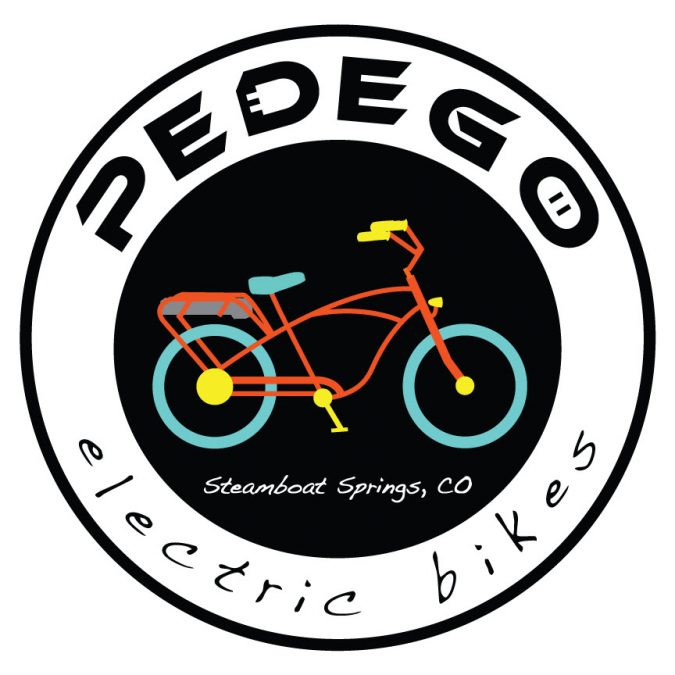 Steamboat has always been a big biking town and, in fact, trademarked the tagline “Bike Town U.S.A.” as the summer counterpart to its claim on skiing. Those hardcore cyclists you see on the trails and out on the road can seem to some as rare a breed as the wildlife.

“How in the world do they do that?” you might wonder as you see road cyclists hammering up Rabbit Ears Pass clad head-to-toe in Lycra and futuristic eyewear at a speed that rivals the car you drove in college. You might even think, “Why in the world would they do that?” when you see mountain bikers flying down Mt Werner in full-face helmets and head-to-toe armor like some kind of alien invasion. 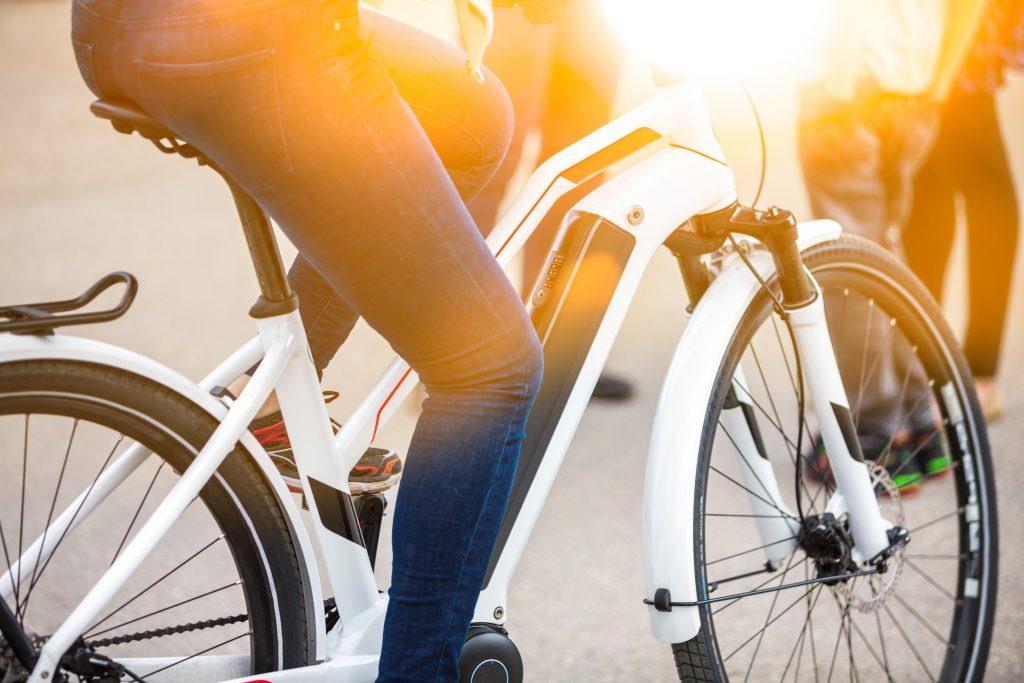 In some ways, e-bikes have leveled the playing field, not so much in terms of the skill or fanatical passion many Steamboat locals possess, but by making cycling more accessible to more people. We caught up with Matthew Coop, owner of Pedego, Steamboat’s premier e-bike rental and bike shop, to get the lowdown on what’s giving so many people such a charge.

What is an e-bike?

An e-bike is a bike with an electric battery that gives riders assistance. There are three types of e-bikes. Class 1 is pedal assist only, Class 2 is pedal assist with a throttle for more acceleration power that can be used independently of pedaling, and Class 3 are the most powerful and can go up to 30 miles per hour. “I only carry Class 2 e-bikes,” says Coop, who is considered a Pedego dealership and only rents and sells the Irvine, California-based brand, though he does also carry electric scooters, 3-wheelers, and one-wheels. “Pedego is known for their beach cruiser bikes, and I have a variety of those in different sizes,” he says. He also has fat tire e-bikes, a mountain e-bike, an electric tandem, and a stretch cargo which he says is “designed to carry a little kid on the back, or to use for baggage or whatever you need to carry.” The bike is designed to carry up to 450 pounds. 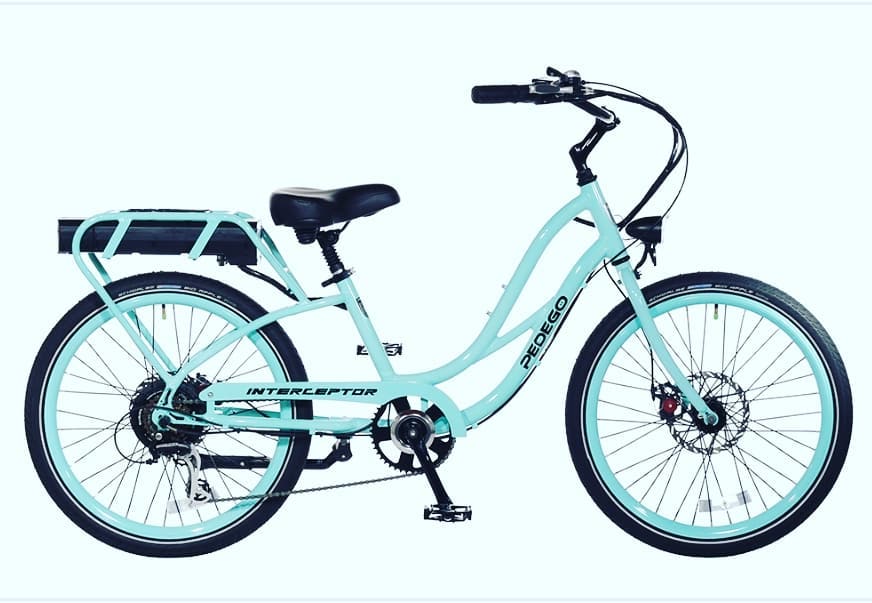 Where can I ride an e-bike?

The cruiser bikes Pedego offers are designed for use on pavement and around town or on paved bike paths like the Core Trail. He also has a mountain bike and a few fat tire bikes that can go on dirt and gravel roads. Keep in mind e-bikes are considerably heavier than regular bikes—around 50 pounds. Coop recommends people plan to ride right from his shop rather than bother with trying to get one of these bikes onto a car bike rack. Keep in mind that most of Steamboat’s mountain biking trails do not allow e-bikes. 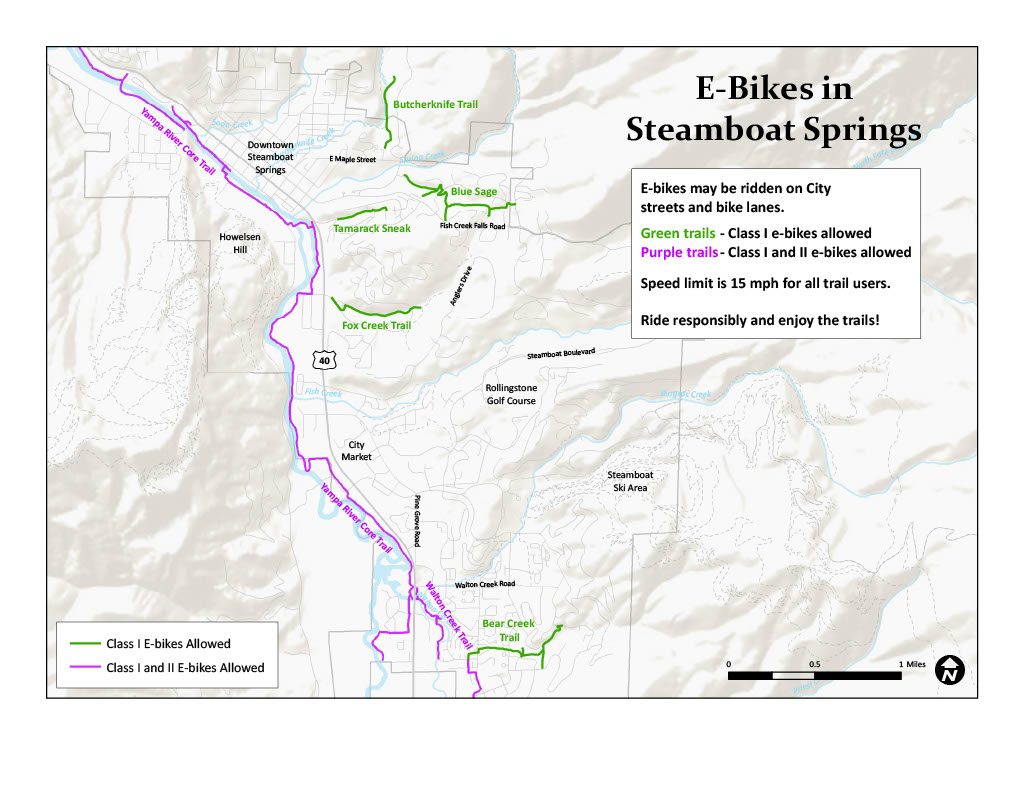 What skills do I need to ride an e-bike?

As the old saying goes, it’s like riding a bike. “You can get on and go,” Coop says. “I give a demonstration on how the bike operates, and there’s a parking lot next to the shop where people can practice. Usually, people will ride around once or twice, and then away they go! Very seldom do people come back and say they didn’t like it. They always have a huge smile on their face and want to know how they can buy one,” Coop says. 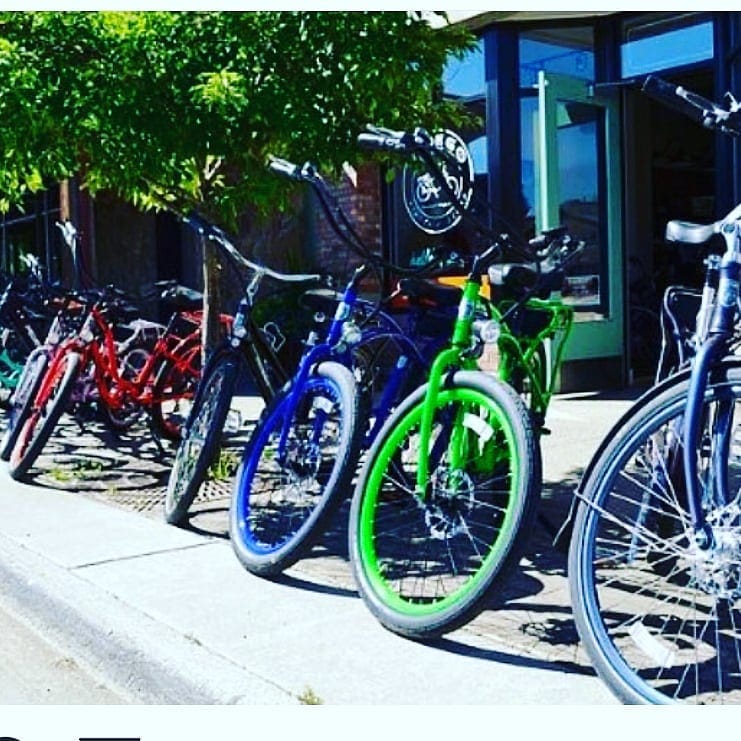 Can you still get a good workout?

The beauty of an e-bike is it’s totally up to the rider to decide how much assistance to use. “You don’t have to use the bike assist if you don’t want to, but my customers tell me they end up getting more exercise because it’s more fun, and so they want to get out and ride more,” Coop says. “They’ll get out more and go farther. You can set it at a lower assist level if you want to get more exercise.” On the other hand, it’s always nice to have that pedal assist if you find yourself up against a strong headwind or don’t have enough gas in your own tank to get you up that last big hill at the end of a long ride. 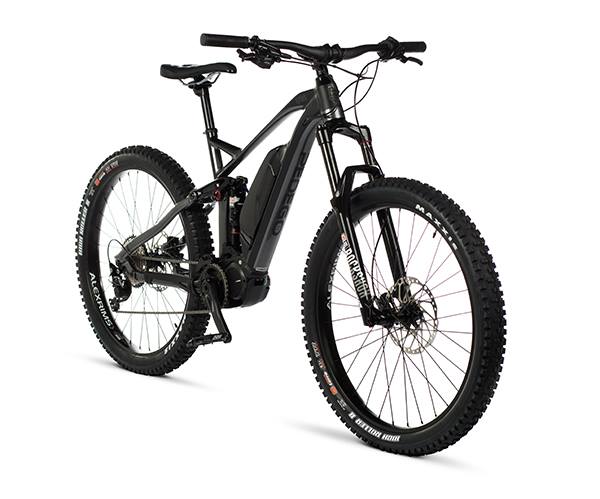 Why are e-bikes so popular?

There’s a variety of reasons, Coop says. “For one, it’s an outdoor activity which has especially been appealing during a pandemic. That’s created a bike craze in general. It’s also great for older folks who don’t have the stamina or power they once had to be able to get out and ride,” Coop says. Ditto that for people from out of town who live at sea level and aren’t yet acclimated to altitude, or maybe aren’t in shape for biking longer distances. “People tell me they love being able to get out and exercise when they couldn’t before for whatever reason,” Coop says. “These bikes have changed their lives.” //Pedegoelectricbikes.com